(A barrage of hypocrisy.) 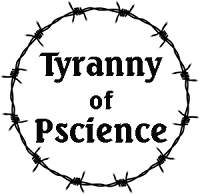 With all the censorship and maligning of counter-narrative voices, with the threats and revoking of medical licenses for challenging “authority,” with the daily, script-reading regurgitations by bought-and-paid-for MSM, with the numerous naïve believers and order-followers of the powers, science is being buried under a barrage of hypocrisy. The powers demand that proven COVID preventatives and cures in numerous small studies be banned till long-term, “peer-reviewed” studies can sanction “on-label” use WHILE thousands die and WHILE experimental vaccines with no long-term, peer-reviewed studies and numerous proven harms be enforced on the global human population.

So how do we spot pscientists of the new normal pscience? How do we name them, one by one?

Perhaps this is the first and only test needed: the attitude to questioning, opposing voices.

In any field of human interest, liberty is a necessary condition of scientific advance. This follows because science can proceed only where there is complete freedom to advance hypotheses contrary to prevailing opinion. Pareto, indeed, considers liberty to be an indispensable requirement of scientific method: “It follows that before a theory can be considered true, it is virtually indispensable that there be perfect freedom to impugn it. Any limitation, even indirect and however remote, imposed on anyone choosing to contradict it is enough to cast suspicion upon it. Hence freedom to express one’s thought, even counter to the opinion of the majority or of all, even when it offends the sentiments of the few or of the many, even when it is generally reputed absurd or criminal, always proves favorable to the discovery of objective truth.” 1

[T]he compulsory conformity to official opinion limits variety and stultifies creative freshness not only in the arts and sciences, but in economic and political affairs as well. Liberty or freedom means above all, as I have said, the existence of a public opposition to the governing élite. The crucial difference that freedom makes to a society is found in the fact that the existence of a public opposition (or oppositions) is the only effective check on the power of the governing élite. … [T]he primary object, in practice, of all rulers is to serve their own interest, to maintain their own power and privilege. There are no exceptions. No theory, no promises, no morality, no amount of good will, no religion will restrain power. Neither priests nor soldiers, neither labor leaders nor businessmen, neither bureaucrats nor feudal lords will differ from each other in the basic use which they will seek to make of power. … Only power restrains power. That restraining power is expressed in the existence and activity of oppositions. Oddly and fortunately, it is observable that the restraining influence of an opposition much exceeds its apparent strength. As anyone with experience in any organization knows, even a small opposition, provided it really exists and is active, can block to a remarkable degree the excesses of the leadership. But when all opposition is destroyed, there is no longer any limit to what power may do. …2

So let us never forget, “when all opposition is destroyed, there is no longer any limit to what power may do.” Let us, however small we feel, be in active opposition to compulsory belief and conformity.