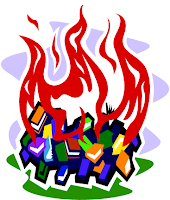 And what was the “great” agenda of that Revolution?

The Red Guards were determined to rid China of the so-called ‘Four Olds’ – old customs, old culture, old habits, and old ideas. Spurred on by Mao’s desire for a ‘great disorder’, the Red Guards shut down and sometimes looted religious buildings, burned books, destroyed historical sites, and even desecrated the grave of Confucius.*

Do we think the like cannot happen here? Except, it already is — under The Great [WEF] Reset. “Old customs, old culture, old habits, and old ideas” are already under unrelenting attack. What is not, both virtually and physically, being looted, burned, destroyed, and desecrated every day? What is not being turned upside down for the sake of a “great disorder” to necessitate and justify a “great new order”?

And all you hidden elites, “anointed” leaders, doppelgängers, and front-line servitors of the new/old Revolution — do not forget:

Senior party officials [and their servitors] were not exempt from the purges and violence of the Cultural Revolution,*

And to all the rest of us, let us ask, repeatedly and deafeningly: BY WHAT AUTHORITY do these so-called powers impose their imaginations and ideas upon the world? They have all become usurpers and deceivers; or the servitors of usurpers and deceivers. They deserve our prayers — firstly, for God-given experiences to bring them to repentance, but if they refuse, let our prayers and actions seek their exposure and accountability through justice and judgment — remembering always, that we do not resist evil with evil.

Please — people, servitors, and alleged powers: Wake up and smell the acrid smoke!

Let us ALL repent, even as Ninevah of old.**