Here’s a recent CBCNews photo and headline (by Kyle Bakx/CBC): 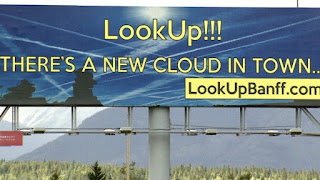 Now that the facts of geoengineering* are getting wider exposure (and can no longer be ignored), the BIG (and small1) guns are being positioned on the heights to “kill” the real story with denials, distortions, and mockery. And what is the real story? It is a story of power and gain.2 The quintessential déjà vu. Perhaps the oldest déjà vu in the world where those pursuing power and gain will always

1) conspire to achieve their own ends;
2) deny and mock the very idea of conspiracy; and
3) do anything and everything necessary to protect power and gain.3

Does the fact that we continue to fall for these denials make us one of the most unobservant, unscientific, historically unlearned of all the ages? Are we just pretending to be 21st Century sophisticates? And what do we call people who refuse to learn from experience, observation, and history?

Thus, the companion story for those who wish to learn from the past is to be on the “Look Out” for

▪ increasing numbers of industry spokesman, (paid or privileged, duped or deliberate) to deny the history of geoengineering and to praise its glorious future;4
▪ trusted “scientists” who sell science and soul to industry dictates and agendas;5
▪ trusted “journalists” who generate talking-point stories from industry scripts;6
▪ so-called “objective” reports that fail to acknowledge contrary facts, evidence, or credible witnesses;
▪ knee-jerk, emotional tirades against “conspiracy nuts” by those who are, or trust in, monetized spokesmen;
▪ extreme or faux activists spouting fringe or bizarre claims that can be easily mocked or debunked and then conflated with real facts and evidence;7
▪ the bottom-line paradigm that hooks into the nose;
▪ the money trail that leads to modus operandi;
▪ the psychopathy of power and gain.8

So perhaps it would be a good idea to quit trusting in compromised / corrupted voices and to do some personal observation and research. Perhaps one could begin with an honest study of the evidence at

__________________/
* Also known in science reporting as weather modification, climate intervention, climate engineering or solar radiation management (SRM), but is mocked under the name “chemtrails” when trying to debunk so-called conspiracy theorists; however if one researches the science terms, one may discover that tinfoil hats are considerably more advanced than blinders and earplugs!
1. E.g., bloggers, journalists, pundits, commentators, dupes, etc., etc. who buy the BIG lies of Big Business—hook, line, and sinker.
2. A power-and-gain story as old as (if not older than) Biblical Cain.
3. http://dejavu-times.blogspot.ca/2016/08/imagine.html
4. E.g., see the CBC Quirks and Quarks interview of January 30, 2016 rebroadcast August 6, 2016 (Time 18:09) at http://www.cbc.ca/radio/quirks/quirks-quarks-for-jan-30-2016-1.3425708/the-planet-remade-through-geoengineering-1.3425811  It seems that Oliver Morton is sadly uninformed or (more sadly) complicit when he presents geoengineering scenarios as in-the-future when they are already decades old in practice. The same applies to David Keith whose words and emotional POV seem to have been parroted by Mr. Bakx. How interesting that both Morton and Keith espouse “future” geoengineering technologies, yet utterly reject the idea that geoengineering have been in secret use for years!
5. E.g., the Ideas broadcast, Mining Science from March 24, 2016 (Time 53:59) at http://www.cbc.ca/radio/ideas/mining-science-1.3502958
6. Mr. Bakx’ story seems to fit industry talking-points to a T+. See also, The REAL Truth Behind ‘Chemtrails’ published Aug 17, 2016 (Time 4:06) The Young Turks at https://www.youtube.com/watch?v=CEii1_kEoZs
Then consider the insightful CBC Ideas presentation: Imprisoned by Profit: Media & Democracy from May 27, 2016 (Time 53:59) at http://www.cbc.ca/radio/ideas/imprisoned-by-profit-media-democracy-1.3601228
7. http://www.geoengineeringwatch.org/
8. http://dejavu-times.blogspot.ca/2014/05/a-plague-of-psychopaths.html
http://dejavu-times.blogspot.ca/search/label/Psychopathy
http://dejavu-timestwo.blogspot.ca/2014/12/without-conscience.html