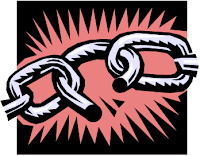 Does it give anyone pause to know that our military reservists are being set-up for “moral injury”?1

And what is moral injury? you ask. From a film-slide in the training module, it says:

“A moral injury is harm caused by ‘perpetrating, failing to prevent, witnessing, or learning about actions that violate deeply held moral beliefs and expectation,'”

In other words, it’s an (emotional, spiritual, psychological) injury you incur when you do, see, or learn about an immoral / inhumane / criminal / despicable act which you did not stop or felt you could not avert because of fear, force, or desire to stay in favor with commanders or colleagues. It is to violate your conscience (your sense of right and wrong) and, thereafter, in most instances, it is followed by self-justification, as a survival mechanism.2

There does not seem to be any instruction on how to avoid “moral injury” by speaking up, by asserting one’s conscience, by refusing to sanction violations of one’s moral beliefs or expectations. There is only sympathy for having been injured.

We may sometimes witness situations that seem ‘inhuman’ to us.
“This injustice may cause us to feel powerless and hurt.”
The slide encouraged soldiers to seek support if needed. (See ftn 1 again)

If Truth is the first casualty of war, then moral injury must be a double-riding second – like Death and Hell upon a pale horse.3 For years, Truth has been a dead concept for the powers (and their MSM) and now with COVID, moral injury is increasingly mandated, everywhere, as intended by those powers.

For those who have not noticed, COVID is, first and foremost, a war against human values, traditions, and God-given rights and freedoms. Every one of our once cherished freedoms has fallen before the psy-oping, fear-pumping powers as people curl inward into a Hell of fear, distrust, accusation, and faith in twisted / twisting “facts and stats.” In-person acts of sharing, comradery, compassion, embracing, touching are verboten for they allegedly transmit potential death. Suspicion of everyone (except for blind trust in the “labcoats” and the vaxxines) is the powers’ agenda. Everyone must be seen as potential contagion.

And so, like the Stanley Milgram Experimental subjects,4 we knee-jerk the shock-lever, apparently oblivious to our own nodal connections.

To acquiesce to – to facilitate the roll-out of – the COVID narrative is the great moral injury. We are being defaced, demoralized, dehumanized, depopulated – the very agenda of The Great (Déjà Vu) Reset.

God (and courageous freedom fighters) help us all.

—————————-/
1. Edmonton · Exclusive: Military reservists preparing for possible deployment in Prairies as COVID-19 rates soar by Jennie Russell, Charles Rusnell, Murray Brewster · CBC News · Posted: Dec 08, 2020 2:00 AM MT | Last Updated: December 8
CBC News has viewed slides that formed a training module for the Alberta reservists
A slide titled “Palliative Care” says, “Caring for the body of the deceased is something that we may experience during Op LASER. It is an occasion to pay our last respects to the person.
“The current circumstances may require us to place their corpse in a body bag and/or vehicle,” it said, emphasizing the need to do so in a respectful way.
Another slide warned soldiers that they may suffer what is referred to as a “moral injury.”
“A moral injury is harm caused by ‘perpetrating, failing to prevent, witnessing, or learning about actions that violate deeply held moral beliefs and expectation,'” it said.
“Because of COVID-19, many people will die earlier than they would have otherwise, and with fewer resources than would normally be available to them. We may sometimes witness situations that seem ‘inhuman’ to us.
“This injustice may cause us to feel powerless and hurt.”
The slide encouraged soldiers to seek support if needed. (Bold Emphasis added.)
Source; https://www.cbc.ca/news/canada/edmonton/military-reservists-possible-prairie-deployment-1.5832023?ref=mobilerss&cmp=newsletter_CBC%20News%20Top%20Headlines%20%20%E2%80%93%20Morning_1613_222812 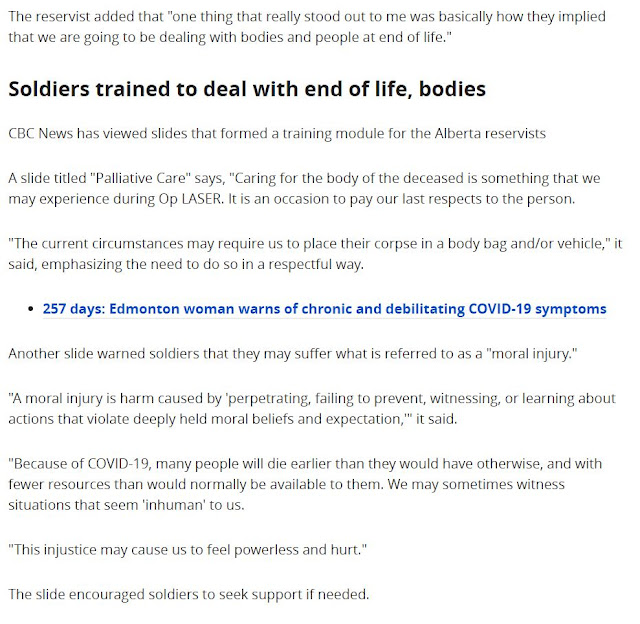 2. Mistakes Were Made (but Not by Me) Third Edition: Why We Justify Foolish Beliefs, Bad Decisions, and Hurtful Acts, by Carol Tavris, Elliot Aronson. (pp. 219-220). HMH Books. Kindle.
3. New Testament | Revelation 6:8 ~ And I looked, and behold a pale horse: and his name that sat on him was Death, and Hell followed with him.
4. https://en.wikipedia.org/wiki/Milgram_experiment
https://en.wikipedia.org/wiki/Stanley_Milgram
https://dejavu-times.blogspot.com/2020/05/a-global-stanley-milgram-experiment.html
https://dejavu-times.blogspot.com/2020/04/real-life-milgram-spe.html